When David Sorensen was first introduced to PathwayConnect, he thought there was no way the program could be for him. “I have a history of alcoholism,” David said. “I was not an active member of the Church, and I was making a lot of mistakes in my life.”

Struggling with alcohol addiction, smoking, and immorality for much of his life, David’s lifestyle made it easy to leave the Church and lose his faith. He’d also previously dropped out of two different colleges with only a handful of credits, so completing college — let alone being able to attend a Church school — seemed impossible.

Then came PathwayConnect. Thanks to his mother, who encouraged him to consider PathwayConnect as a way to jump-start his education, David enrolled, seeing the program as his “best shot at a good future.”

From his very first gathering, David felt a desire to become better and grow closer to God, but he knew his addictions were holding him back. “Having an addiction is a spiritual disease,” David said, “and it needs to be combated spiritually.” So that’s what he did. 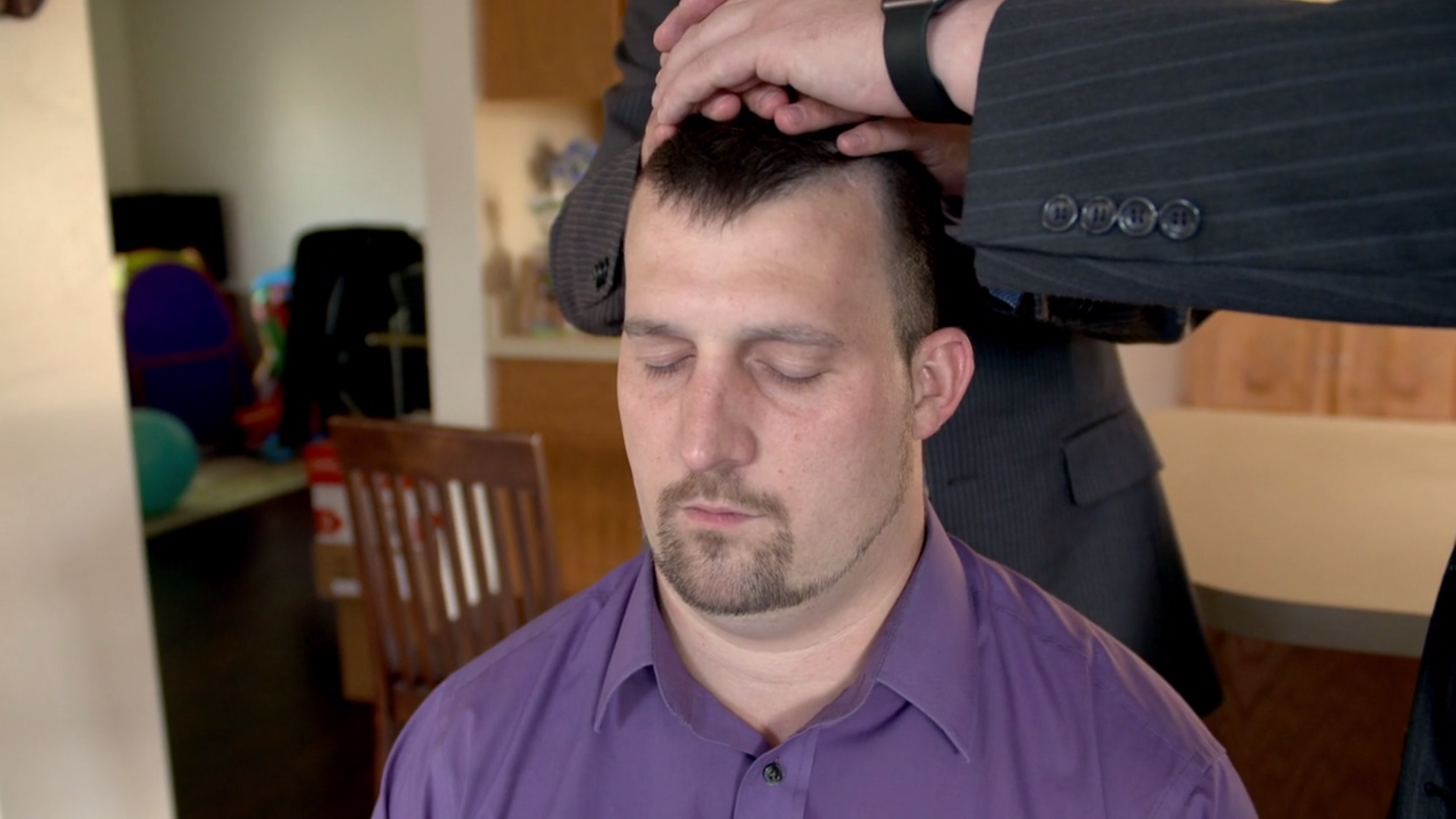 David Sorenson received a priesthood blessing to help him overcome his challenges.

During his first week at PathwayConnect, David asked Elder Purles, a Church-service missionary in Sandy, Utah, for a blessing to help him overcome his challenges. The following week, David received that blessing, which he states “altered my life in a huge way.”

“It was a very powerful, spiritual experience for me — one that I think I will remember for the rest of my life,” David said. “It turned things around for me; I was able to quit smoking and drinking immediately.”

Addiction is a spiritual disease, and it needs to be combatted spiritually.

Because PathwayConnect doesn’t require students to get an ecclesiastical endorsement (a statement from a bishop regarding a student’s commitment to live by gospel standards, which all Church-owned schools require), David was able to benefit from the temporal and spiritual blessings PathwayConnect provides.

“If I would have needed the ecclesiastical endorsement before I started the program,” David said, “I don’t know that I would have been able to even attempt to participate in the program. I probably would never have even started.” 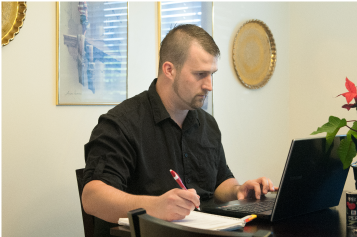 David working on his schoolwork

Since David’s first week in PathwayConnect, when he received that priesthood blessing, he hasn’t returned to his former lifestyle. He felt the Holy Spirit during his classes and knew he wanted that feeling to last. The support and environment he found in PathwayConnect made him feel at home and comfortable. David said he felt peace and confidence that he could achieve his goals along with strength and a willingness to make changes quickly. Faith was back in his life.

Every aspect of my life improved from the second I started attending.

For David, the spiritual components of PathwayConnect were what he needed to change. “I felt it made a huge impact on me. I’m the type of person that sometimes needs different aspects of learning to be able to understand and grasp concepts, and the program not only helped me academically, but it helped me spiritually. Every aspect of my life improved from the second I started the program.” 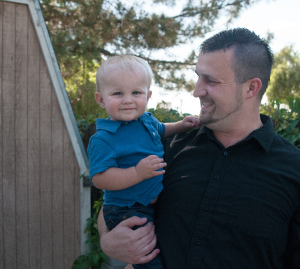 David with his son, Roman

Weekly PathwayConnect gatherings also provided the strength David needed to return to church and spiritual activity. Learning of the challenges his other classmates faced helped David find the humility to open up about his own challenges and become the man he always wanted to be.

“At first, I tried to keep my personal issues secret and to myself — I didn’t necessarily want anyone else to find out what my personal life looked like,” David said. “But very quickly, I realized that my classmates weren’t all that different than I was. Everybody came from a different background. There were people that I felt were in similar situations that I was in. It made me really feel at home, like I didn’t have to worry about being judged.”

Because David found a safe place in his gatherings, he was able to humbly take a closer look at his life and come to another realization — he didn’t want a wife who would accept him with all of his addictions. He wanted to be “spiritually attractive” for his future wife.

On Valentine’s Day 2014, David married his sweetheart, Lauren, and they now have a two-year-old son named Roman.

“My wife and son are fantastic,” David said. “Roman is a beautiful, happy, smart child. He just learned how to say ‘no,’ and it is adorable. And we just found out we have our second child on the way!”

David credits PathwayConnect for reestablishing his connection with God and strengthening his faith. “It was huge for me to be able to learn by the Spirit,” David said. “It helped open up a door to the Church that had been closed for a long time.”

I knew that as long as I did my part, God would do His.

Because of PathwayConnect and the blessings of fully living the gospel, David found confidence in himself and his life. “I knew that as long as I did my part, God would do His part to help; and I needed that. I needed a little bit of help from my Savior to push me in the right direction, something that I was never able to find by myself.”

David made PathwayConnect more than an academic endeavor: It became a spiritual journey that resulted in a spiritual rescue.

Learn more about David’s story by watching his video.

David plans to join BYU-Idaho’s online degree program and work toward a bachelor’s degree in business management, presented and coordinated through BYU-Pathway. He then wants to earn an advanced marketing degree through another university.

Addictions are real, but they don’t have to be overcome alone. The Church of Jesus Christ of Latter-day Saints has provided a 12-Step Program to help people fight addictions. Learn for yourself or a friend and find out how to be physically and spiritually free through the Lord’s help. 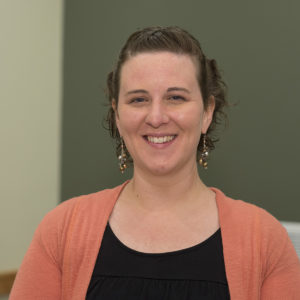 From Dancing and Drama to a Four-Year Degree
When Amanda VandenAkker was a little girl, all she could think… 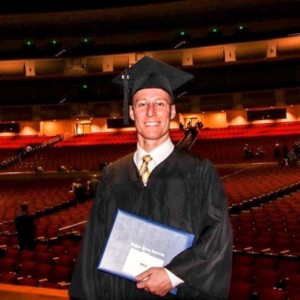 When You Put the Lord First
Like many others, Daniele Salerno put his education on hold to… 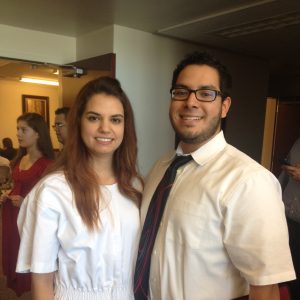 Come Unto Christ
“I’ve never denied the Church. I’ve always had a testimony. But…

Comments on "Addictions and Blessings: Finding Faith through PathwayConnect"

Wonderfully shared. You are brave enough to share what struggle is, with your addiction. Heavenly Father knows us individually and surely he will bless your struggles to achieve your goal. God Bless your new family❤️❤️❤️

Brother David, thank you very much for sharing this inspiring life history. Indeed it’s true; everything is possible when we trust God and allow Him to change our life to the way He wants us to be. If we have strong faith and commit our whole life to our Saviour Jesus Christ, we can be changed to a vessel that the Lord may use to bring others to His Kingdom.

Thank you very much for sharing with us David’s experience of addiction. It is indeed a wonderful narrative where almost all will get a moral lesson from what they have read, and it will certainly help all to foster their spiritual belonging or connection with God. I believe that addiction can be overcome through faith in Christ, prayers, and firm belief. In this way, one status can be improved socially and spiritually in which the connection with the Heavenly father can be more close.

Thank you for being brave enough to share your personal struggles with addiction. Many people struggle with addiction and need to hear stories just like yours of how a person can overcome and be more than the addiction. I personally have not had struggles with addiction; however, I have faced other struggles, and the same principles you have used to overcome your struggles I will use for my own personal struggles in hopes of overcoming. After watching this video, I will schedule a priesthood blessing. Thank you for your example and showing others that it is possible to get help and overcome addictions.

Yes, I believe in Faith all things are possible in the lord’s way and I appreciated their experiences and thank you so much for sharing with me I learned new things today.The lord will continue bless you David as well.

I am in the same boat (David’s earlier feelings). I’m registered for Pathway Winter 2016-2017. This will be my first experience with Pathway. I have hope and faith my relationship with Christ and HF will become one from what Pathway may bring me.