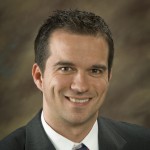 “PathwayConnect is a rescue tool.”

“It has tended to have the effect of turning students’ hearts back to the Savior.”

“It is more than just an academic program. It is connected with gospel principles, doctrine, the scriptures, and the Atonement.”

While PathwayConnect certainly does provide outstanding opportunities for individuals to achieve their educational goals, it is so much more. As former BYU-Idaho President Kim B. Clark stated, “We’ve … seen PathwayConnect not only as an educational experience but as a conversion experience for the student, as an opportunity to help get the gospel deep into their hearts, prepare them to lead families, and become leaders in the kingdom.”

PathwayConnect provides an opportunity to rescue.

Danny Miller may offer some of the greatest insights into the blessings PathwayConnect provides. After all, he’s the stake president in charge of overseeing the highest-enrolling PathwayConnect site in the world — Orem, Utah — which has more than 500 students currently participating.

Having taught high school for 31 years, President Miller is no stranger to education. “I really felt PathwayConnect would never work. But I was wrong. I was so wrong. This has been one of the most powerful tools to help Church members,” Miller said.

And when he says PathwayConnect is powerful, it’s because he’s seen it firsthand. Every Thursday, he attends a meeting one hour before PathwayConnect gatherings begin where the local service missionaries assigned to BYU-Pathway discuss updates, ask questions, and offer support to one another. And afterward, he bounces between the 23 gatherings held at two church buildings in Orem.

One of the most powerful witnesses President Miller gained of PathwayConnect’s power came from a divorced mother who struggled with occasional seizures and had lost her faith. A short time after joining PathwayConnect, this woman began attending church again. “She met with her bishop and began to put everything in her life back in order,” President Miller said. “And then one night after a PathwayConnect gathering, she had a massive seizure at home and passed away. At her funeral, her father specifically accredited PathwayConnect with helping her get her life back to a place so her faith was where it needed to be.”

Stories like this of people finding, renewing, or strengthening their testimony of the gospel of Jesus Christ are commonplace. Here are just a few examples shared by priesthood leaders:

A single mother of four children who was semi-active in her faith. Shortly after joining PathwayConnect, she had strengthened her testimony and received her temple endowment.
Shared by Elder Milan Kunz; Philadelphia, Pennsylvania; Sixth Quorum of the Seventy

A single sister in my area had stopped attending church. Because of PathwayConnect’s required religion courses, she became more involved in the gospel. She started going back to church and is now continuing her education online through BYU-Idaho.
Shared by Elder Mark Frost; Flagstaff, Arizona; Sixth Quorum of the Seventy

A young man who, after returning home from his mission, stopped reading the scriptures regularly. Several months after enrolling in PathwayConnect, he had developed a stronger testimony of the scriptures and prayer.
Shared by Elder Taylor Godoy; Lima, Peru; Fourth Quorum of the Seventy

I feel PathwayConnect comes from our Heavenly Father, and I know it can bless countless members’ lives.

“We have rescued many people through PathwayConnect,” said Elder Godoy. “We are seeing how church attendance is increasing thanks to PathwayConnect. It is more than just an academic program. It is connected with gospel principles, doctrine the scriptures, and the Atonement. I have seen how PathwayConnect students are changing their lives.”

Why Priesthood Involvement is Necessary

Many dedicated people are involved in the PathwayConenct effort, from service missionaries, to full-time employees, to the students themselves. But the one factor that seems to make the most significant impact is the priesthood.

In the Church’s South America Northwest Area, for example, each of the 16 Area Seventies have all been tasked with supporting PathwayConnect in their 32 coordinating councils,1  which are comprised of 283 associated stakes in five countries. According to Elder Godoy, “That means more students will get involved in PathwayConnect because more priesthood leaders are engaged in the effort.” 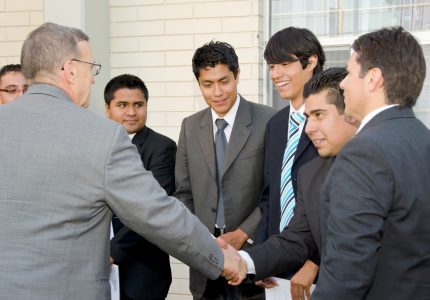 Former Mexico Area President, Elder Daniel Johnson (on the left), is greeted by BYU-Pathway International Director, Gene Hayes; Raul Hidalgo; and Yael and Ayami Martinez at a celebration after the first group of students completed Pathway in Puebla, Mexico

And it seems to be working. South America Northwest has the fifth-highest PathwayConnect enrollment out of the Church’s 25 areas, but has the highest enrollment among the 15 areas outside of the United States.

He also suggests utilizing home and visiting teachers. “Sometimes, as a priesthood leader, people I never would have expected to be interested in PathwayConnect are, and they end up receiving great blessings.” By educating home and visiting teachers about PathwayConnect and its benefits, nearly every member of a ward or branch can help extend BYU-Pathway’s reach to many more people.

A Path to Many Things

“I always think of the spiritual rescue,” said Elder Frost. “By far, one of the biggest blessings of PathwayConnect is the requirement for students to take religion courses. Some of those students may be less active in the Church, or dealing with an addictive behavior, or having another struggle. And as they participate in PathwayConnect, it turns their hearts back to the Savior. So, in addition to giving students a jump-start educationally, PathwayConnect helps them to be rescued spiritually.”

May the blessings of PathwayConnect roll forward according to God’s plan and timetable.

As Elder Frost so humbly declared, “I have gained a strong witness of the inspiration for this program. I feel PathwayConnect has come from our Heavenly Father, and I know it can bless countless members’ lives as they take the opportunity to participate in it.” 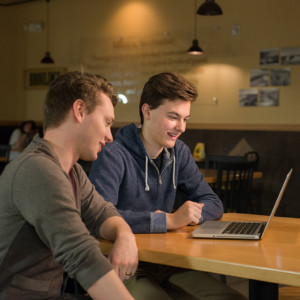 So You Want to be a BYU-Pathway Student?
BYU-Pathway Worldwide is many things — it’s an educational opportunity, it’s… 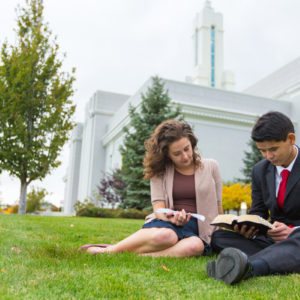 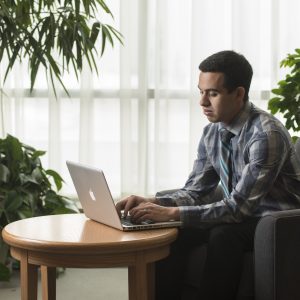 The Purposes of PathwayConnect
“Create knowledge, to open the minds of students to that knowledge,…

Comments on "A Rescue Opportunity"

We are Pathway missionaries and we can testify that this is a very important rescue tool. Without a doubt it is not just a rescue tool it is strengthening those who are already strong by helping them be better followers of Christ their Savior. We have rarely felt the spirit so strong and the students look forward to every gathering. This is not our doing it is the inspired material and way the way the program is designed! We love Pathway!

A less-active couple in our class have completed their first semester of Pathway and are going to the Temple to be sealed next month!

What a wonderful story! Thank you for sharing, Cathy. We’d love to learn more about them. I’ll email you for additional information.

Pathway has been my beacon of light this year . This path has lead me closer to my heavenly father.