A ship of curious workmanship
BY: Breanne Su'a

Many things in the Book of Mormon are described as a “curious workmanship” — the Liahona, tools and buildings, the gold plates. Each time, ancient prophets attributed these creations to the Lord. But perhaps one of the most impactful creations in the Book of Mormon is the ship the Lord commanded Nephi to build to cross the ocean to the promised land.

“[W]e did work timbers of curious workmanship. And the Lord did show me from time to time after what manner I should work the timbers of the ship.

BYU-Pathway Worldwide, guided by the Spirit, began the creation of its own ship of “curious workmanship” in 2018 by redesigning the curriculum for its PathwayConnect program. The new curriculum, which is currently being piloted and launches in April, has been refocused to help students gain meaningful life, professional, and university skills while better transitioning them into an online certificate and degree program after PathwayConnect.

The Journey to a New Curriculum

“You could ask, ‘Why mess with something that’s working?’ This program has served tens of thousands of students marvelously. It’s changed lives,” said Bryan Pope, curriculum director for PathwayConnect. “But as good as this model was, it’s not the model that can take education to wherever the Church is organized. We needed a curriculum that would deliver core skills to every Church member and help them be the most successful. The new curriculum meets students where they are and moves them along their path and helps them serve in their path.”

Pope, the only curriculum writer at the time, began the process of building the new curriculum. But, quickly realizing that this work would require more hands on deck, BYU-Pathway brought on two additional writers, Curriculum Manager James Findlay and Curriculum Specialist Sarah Jackson. The team also began collaborating with 17 other employees located throughout the country. 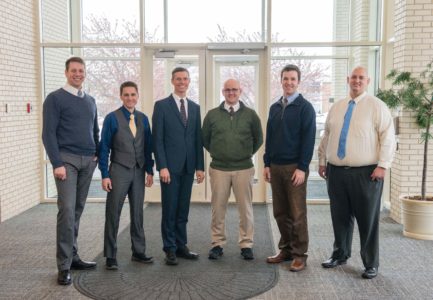 The new curriculum was created by a team of writers located throughout the country, including a team at BYU-Idaho. Left to right: Tyler Beckstrom, Sean Short, Craig Johnson, Joel Drake, Michael Matthews, and Scott Rey 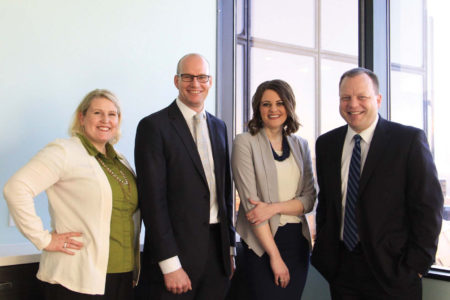 “The Lord has brought people in at just the right time to make this happen,” Pope said. “It’s been faith promoting just to watch.”

Commenting on the rewriting and redesigning of the curriculum, Findlay said, “It’s been a curious process. We’ve needed to up our spiritual game. It’s less of an academic process and more of a spiritual process. If I don’t have the Spirit with me, I can’t write anymore.”

The new curriculum uses integrated and applied learning models to teach students basic math and English skills, while also preparing them to earn a certificate and degree and apply what they’re learning in their lives. In fact, math and writing skills are woven into the course outcomes, which focus on practical application: for example, students learn math by creating a budget or learn writing by composing a cover letter.

“Imagine if you could only take two or three courses your entire life,” Pope said. “What skills would you put in those classes? That’s what we’ve done. The new courses cover all the foundational skills you need in your life — including math, writing, and professional skills — and teach you how to learn. It’s going to change people’s lives because it’s very applied and practical and it also integrates with our new certificate and degree structure.”

Preparing Students for College and Life

BYU-Pathway Worldwide’s mission is to provide access to higher education wherever the Church is organized. A worldwide organization means a broad spectrum of students with varied backgrounds, cultures, ages, languages, and so on. With such an unconventional audience, BYU-Pathway needed an unconventional approach to its curriculum.

Jackson, describing the unique approach, said, “It is a purpose-driven curriculum rather than an audience-driven curriculum, since our audience is so broad. BYU-Pathway has such strong core purposes. We knew these also needed to be our objectives when writing the courses.”

The curriculum outcomes mirror BYU-Pathway’s three purposes: (1) help students get the gospel down into their hearts, (2) help them become capable learners, and (3) prepare students to lead and support families. These foundational purposes stretch beyond just helping students learn basic skills — they prepare students to become what they need to be in order to be successful in life.

Commenting on the applied-learning focus of the new curriculum, Findlay said, “Education is becoming less about academia and more about creating students who are prepared. We’re helping students learn how to learn. As a result, they will be prepared for college and life. Life and education, it’s the same thing.”

BYU-Pathway seeks to do just that — to help students become who God wants them to be by preparing students for life and, ultimately, to build Zion.

Jackson, who worked as an instructor for 11 years prior to her role with curriculum, shared how she believes the curriculum will help students grow into their role in Zion. “I’ve come across hundreds of students in my courses, many who come from broken homes with no one to believe in them,” she said. “After PathwayConnect, these students are going on to earn degrees, becoming temple recommend holders and, for the men, priesthood holders. So, who is the curriculum for? It’s for those students, so they can see their potential and actually become what Heavenly Father wants them to become.”

Bridging the Gap to a Degree Program

In order to help students truly become something, PathwayConnect’s new curriculum needed to enter uncharted territory in online education. While most online curricula follow a “Life Skills-Math-English” format, as the previous curriculum did, the new curriculum follows an integrated format that bridges the gap between PathwayConnect and online degree programs offered by BYU-Idaho and coordinated through BYU-Pathway.

PathwayConnect is comprised of one year (three semesters). In the first two semesters, math and writing skills are woven into courses focused on developing life and professional skills.

In their third semester, students take a university skills course and the first course of a 12-15 credit job-ready certificate they choose. This certificate leads to employable skills and counts toward an associate and bachelor’s degree, accredited by BYU-Idaho. Through this integration of PathwayConnect and a degree program, students will have already begun their certificate while still in PathwayConnect. Students will have all the academic support they need to chart their course through the different stages of their education.

The innovative courses are built around seven objectives that embody valuable skills: follow Christ, lead with integrity, manage career, collaborate, solve problems, use quantitative reasoning, and communicate effectively. These skills gained during PathwayConnect combined with the skills earned through certificates will greatly increase a student’s employability.

“Students who complete a certificate first are more likely to persist in earning a bachelor’s degree,” Findlay said. “Part of PathwayConnect’s job is to prepare students to start and complete that certificate.”

The curriculum isn’t meant to provide students with every skill they need in a particular area, but rather to provide them with the tools they need to tackle future responsibilities and situations in life. In their courses, students will learn study, time-management, goal-setting, financial-management skills, and more.

“We’ve thought about students’ futures,” Pope said. “After PathwayConnect, they’ll remember they did something hard, and they’ll know they can make it. They’re going to persist longer because they have achieved success.”

Application is key to personal growth — spiritually, personally, academically, and professionally. That is why the new curriculum helps students apply what they are learning so they can develop as disciples of Jesus Christ who are leaders in their homes, the Church, and their communities.

“The curriculum is groundbreaking,” said Jackson. “What the students are learning is more true to life experience for them. It enables them to transfer the knowledge they’re learning into their daily lives.”

“It’s a ship of curious workmanship, guided by the Holy Ghost,” Findlay said, describing the curriculum. “What we’re handing students is an applied-religion program and asking them to push the boundaries of their comfort zones. When you reach your boundary and can’t do it on your own, you begin relying on divine power.”

Pope added, “To effect the change, you have to sacrifice. It has to be hard, and these courses are hard. It’s not hard because the content’s super hard — it’s hard because you have to change your life to do it.”

As Nephi’s family obeyed the Lord, He instructed them how to build a ship, which guided them safely to the promised land. BYU-Pathway’s curriculum is being carefully rewritten, redesigned, and thoroughly tested to guide its students along their educational journeys to brighter futures. 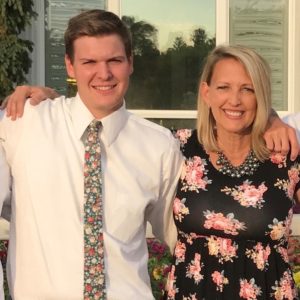 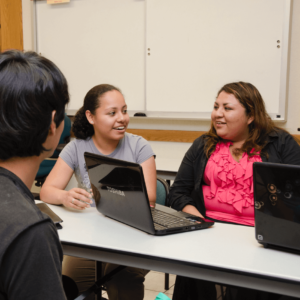 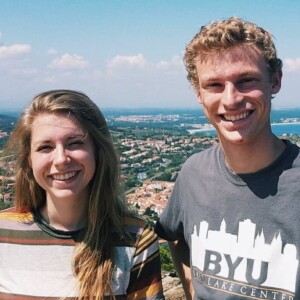 Cancer and Confidence
My twin brother, Scott, and I have always done everything together.…

I’m already enrolled for this 2020 first session. I hope I’ll make it despite not being good enough at math.

Is PathwayConnect available in Kiribati?

Teorabati, there are plans to launch PathwayConnect in Kiribati starting January 2020!

This is Sister Deibel from Saginaw MI. We are just completing the second semester of the North America Northeast Virtual Pilot, as Missionaries. We have 18 students from Michigan and Maine’s Rural areas. Our gatherings have been on line due to the long distances between students. We have been amazed how loyal our class is to the program, the other members of the class and the Lord. We seldom have less then 100% attendance. They cheer each other on easily bare their testimonies and are anxious to help each other to understand the lesson material. They consider each other great friends. Some in class were so shy when we started, they could not be s lead student or even contribute, but over time and with the strength they get from each other, all teach effortlessly. Two class members had to move during the semester to southern states, they never miss a blink and are very happy to have taken friends with them to their lonely new location. I believe virtual is amazing, I can’t say enough. We are going have a meeting/picnic at the end of the year both in Michigan and Maine and we all can’t wait to see each other in person. I want to end by saying the curriculum sounds like it will be great, I know our students are ready for whatever college has to offer but the new program sounds like the transition should be easier. That first semester while good did have room to step up. We do have a few students disappointed with having discovered their major was being dropped, but we told them things are changing so fast, wait and see what the future holds. We are very excited to start the new year this fall and would be happy to help anyway we can. Sue Deibel