Where Are They Now?

Students from the initial pilot share what their lives are like now, 10 years later
BY: Joseph Klenotich and Lauren Conrad

When PathwayConnect started as a small pilot in 2009, there were just 50 students in three locations: Manhattan, New York; Mesa, Arizona; and Nampa, Idaho. Now — 10 years later — BYU-Pathway Worldwide’s programs are offered in 145 countries and all 50 U.S. states and have served more than 116,000 total students.

The first 50 students were just the beginning of a legacy that will continue to grow for years to come, but they will always hold a special place in BYU-Pathway’s history as they helped to pioneer a program that provides opportunities for higher education throughout the world. Here are just a few updates from the “Class of 2009.”

In 2009, Kameron Lemon had dropped out of school to raise her family, and her husband, Chad, had never been to college. Now, they’ve earned their degrees and have started two businesses. 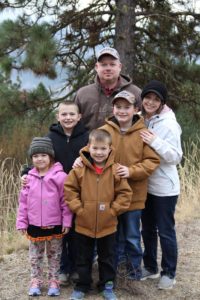 Kameron’s number one regret in life was not finishing her education. When she heard that PathwayConnect was starting in Nampa, Idaho, the Spirit confirmed that she should enroll.

Her husband, Chad, had never attended college, so he decided to enroll with his wife. “Once you’re married and you have kids, it is harder to go back to school,” Chad said, “but it is worth it.”

After completing PathwayConnect, Kameron and Chad both earned their degrees online through BYU-Idaho. Kameron completed her bachelor’s degree in university studies, and Chad completed his associate degree in business. They currently live in Nampa with their four children and have started their own trucking company and an alfalfa hay farming business.

Chad and Kameron agree that the skills they learned in PathwayConnect and their BYU-Idaho courses increased their capacity to run their businesses.

“Pathway gave me the confidence and motivation to be a leader,” Kameron said.
BYU-Pathway also helped the Lemons in their home. “It has helped me become a better mother and teach my children self-worth,” she said.

Through their education and hard work, they have been able to provide for their family both spiritually and temporally.

Meredith Foster’s anxiety made education difficult for her. PathwayConnect helped her earn her degree, receive improved employment, and become an example to those around her. 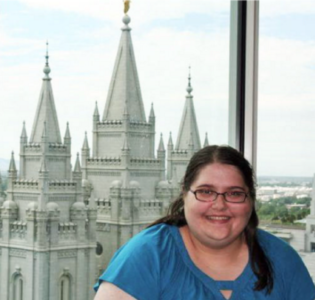 When Meredith Foster was 16, she began taking classes online to help curb her severe anxiety, but education remained a challenge.

Meredith was introduced to PathwayConnect at an institute class. She decided to take a chance and enrolled in Mesa. “I was nervous before the first gathering because I didn’t know who was going to be in my group or how many people would be there,” she said. But as she started, she felt more comfortable and became friends with some of the students.

Meredith eventually earned an associate degree in university studies online through BYU-Idaho. “After I received my degree, I was given the opportunity to go from being a crossing guard to an instructional assistant, primarily helping an autistic student, which I could not have gotten without my degree,” she said.

Meredith expressed that PathwayConnect strengthened her faith in Jesus Christ, encouraged her to share the gospel with others, and helped her set an example at home.

PathwayConnect also allowed her to get an education while managing her anxiety. “Pathway gave me the confidence to continue in school and follow through with my commitments,” said Meredith. “It gave me confidence to help other people.”

Amanda VandenAkker’s acting classes were very expensive. BYU-Pathway allowed her to earn her degree quickly and at a low cost. Today, she teaches private voice lessons. 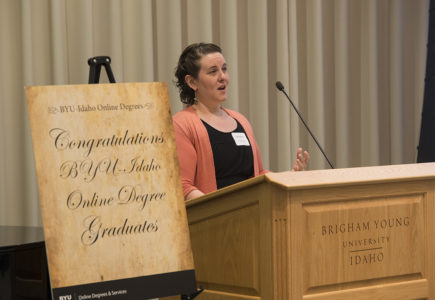 Amanda VandenAkker developed a love for theater at a young age and eventually enrolled in New York’s American Musical and Dramatic Academy. She could only afford to take a couple classes each semester, but despite the time it would take, Amanda was determined to earn a college education.

Amanda married her husband, Tyson, in 2006. She put her education on hold to work while he finished his degree and to be a mother. However, she still hoped she would finish one day.

In 2009, Amanda enrolled in PathwayConnect and became one of the first students in Manhattan. “I loved Pathway,” said Amanda. “I could be a mother by day and a student by night without neglecting anyone.”

Amanda completed her BYU-Idaho degree online in university studies and minored in marriage and family studies. “I knew I could do it. And I wanted to — not just for me, but for my kids,” she said. “I am so glad that I can tell my children that I have a university degree.”

Amanda is now working as a private voice instructor and volunteers as a choir director at her children’s elementary school.

Nate and Jessica Droppo were both looking for a way to begin their college education, but they got a lot more than they bargained for! They will both graduate from BYU-Idaho in December 2020. 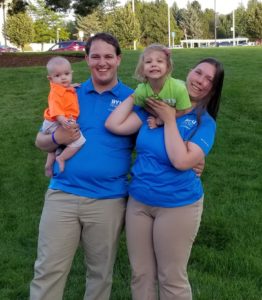 In 2009, Jessica Edwards learned about PathwayConnect and was excited she could enroll despite not having a high school diploma at the time.

Meanwhile, Nate Droppo had set a goal to attend BYU-Idaho someday, and PathwayConnect was the perfect first step. They both decided to enroll in Mesa.

The sparks first flew when Jessica was the lead student and Nate assisted her. “We became good friends, and it went from there,” Nate said. They even practiced filing taxes together as a “couple” for a personal finance assignment!

Nate and Jessica completed PathwayConnect, dated for several months, then both served missions. They married in the Gilbert Arizona Temple in 2015 and now have two daughters, Sierra (3) and Lily (1). They moved to Rexburg, Idaho, in 2015 to attend BYU-Idaho.

Nate currently works in customer service while he and Jessica pursue bachelor’s degrees in interdisciplinary studies. Nate is studying architecture and physics; and Jessica studies education, music, and theater. They plan to graduate together in December 2020.

Taylor Story never planned on going to college, but thanks to BYU-Pathway, he’s earned an associate degree and is working as a product developer while he pursues a bachelor’s degree in business. 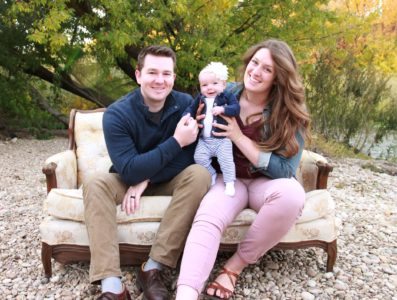 Taylor Story finished high school at age 17. He wasn’t sure what to do for the next year and a half until he could serve a mission.

When a friend mentioned PathwayConnect to Taylor, he decided to enroll and became one of the first students in Nampa.

“Before Pathway, I didn’t think education was worth it,” Taylor said. “When I did the Pathway program, it was cool. It felt like people were actually trying to learn, and I really respected the instructors.”

Thanks to his positive experience in PathwayConnect, Taylor attended BYU-Idaho after his mission. He completed his associate degree and is now working toward a bachelor’s degree online in business. He hopes to own a business someday.

Taylor and his wife, Jessica, had their first child — a baby girl — in July 2019. He is currently working full-time as a product developer and project manager for an electric company in Nampa.

Kat Solomon was hesitant about taking online classes, but PathwayConnect inspired her to earn two degrees. She is currently working as a real estate agent and plans to attend nursing school. 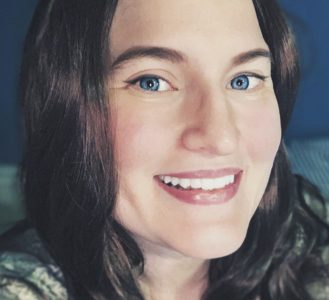 A friend introduced Kat Solomon to the idea of PathwayConnect. Kat didn’t think she would enjoy courses that were mostly online, but her friend’s continual encouragement convinced her to take a chance and enroll. She became one of the first BYU-Pathway students in Manhattan.

“PathwayConnect was wonderful because I had teachers to help me through the program, and I felt supported in my goals,” Kat said. “It was the first time I ever did any online classes, and it taught me how to be a really good student. I was able to study better, and I was better at disciplining myself with my time.”

The skills Kat learned in PathwayConnect turned out to be invaluable for her because they helped her balance working full-time and taking online classes from Utah Valley University. She earned an associate degree in fine arts and graduated in 2016 with a bachelor’s degree in emergency services.

Kat’s goal is to become a surgical or emergency room nurse. She recently obtained her real estate license and is currently working as a real estate agent to earn money for nursing school. 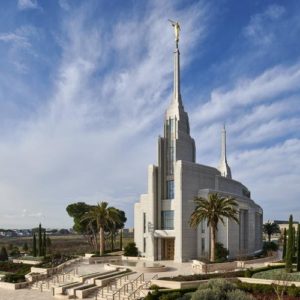 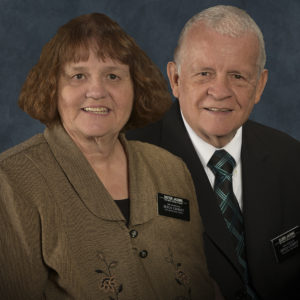 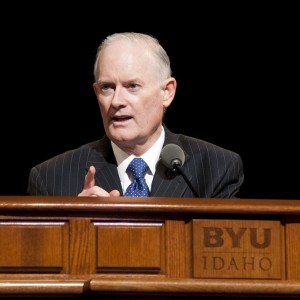 Comments on "Where Are They Now?"

Very inspiring. I just hope I could tell a story someday.